A cervical disc herniation implies a condition where the disc in the neck has ruptured or broken resulting in the internal contents of the disc compressing on a nerve that goes to the arm and hand. This results in neck pain, weakness and numbness going down the arm into the fingers. In most cases, the pain and dysfunction will be temporary and will respond to non-surgical therapies such as steroid injections, NSAIDS, physical therapy and rest.

In some cases, pain and neurological dysfunction persist and require surgery if indicated. In these cases, surgery involves microsurgical disc removal, either anteriorly (from the front) or posteriorly (from the back). Which operation is indicated is mostly dependent on the location of the disc. Most cases will be done anteriorly through the neck's front due to the location of the spinal cord. When done from this approach, a cervical fusion will need to be done using bone or a bone substitute to fill the space from where the disc was removed. Generally an anterior cervical plate will also be used to give the fusion stability. 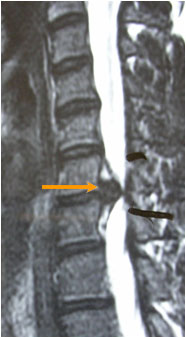 This image shows a C6-7 Herniated disc (gold arrow) that was compressing the C7 nerve root, resulting in severe arm pain. After an appropriate trial of conservative therapy had failed, the patient underwent successful C6-7 anterior cervical discectomy and fusion with plating. 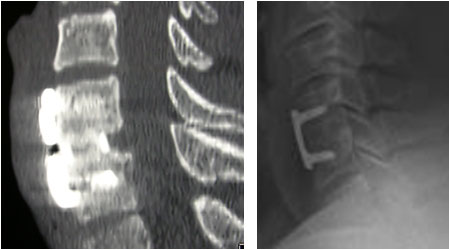 A 6 month post-operative CT scan (left) and a 12 month plain x-ray (right) of the cervical spine show a solid fusion at both 6 and 12 months. 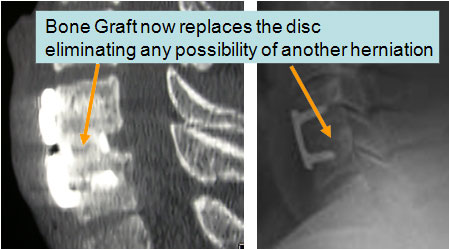 A 6 month post-operative CT scan and a 12 month plain x-ray of the neck show a solid fusion at both 6 and 12 months. The bone graft now replaces the disc eliminating any possibility of another herniation. 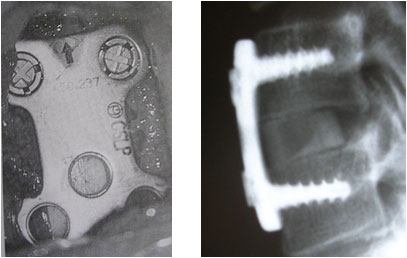 A titanium anterior cervical plate (OR photo-left, x-ray-right) is used to lock the bone graft in between the vertebral bodies to provide instant stability and facilitate proper bone fusion.